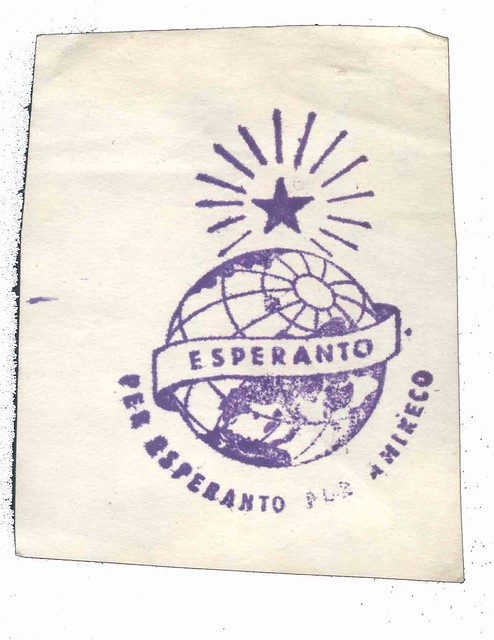 At the time that I am writing this, I am actively learning Esperanto through Duolingo, Wikibooks, an amazingly simple and reliable translator-dictionary application, and through this cute interactive platform called Yakk, when I can remember that I have it installed. Most of all, I study it via Lernu, the website made for learning Esperanto specifically.

I could write a nicely-packed blog about the pros of learning Esperanto, and a few of those reasons are in fact mentioned here, but this list is actually my personal reasons for learning Esperanto. A lot of people grab a hold of the language because it makes learning other languages easier—that is actually a huge factor in my learning it—whereas others like the fact that the Esperanto has its own couchsurfing community, called Pasporta Servo (this is not so important to me, but it’s nice to know).

All of the general scientific and social reasoning for learning Esperanto has already been blogged about, by many more famous bloggers than I. That being said, I hope to shed some light on the pros of this independent language (I can’t really think of any cons), and maybe open your eyes to some new material or aspects of all that it has to offer.

1) The original thought behind Esperanto. I won’t lie, I’m still enamoured with the driving force that pushed Zamenhof to create Esperanto: to create a universal language that was simple to learn, and that could overcome social and linguistic barriers.

This concept really rings true to me for several reasons, mostly being (without getting too politically or spiritually polarised) that I believe in peace, and understanding, and sympathy. I believe in neighbourliness and helping others, and overcoming adversary together. I believe in the universe, and universal goodness, and just the thought that there was a human being that was so dedicated to a similar ideal makes me glow with happiness a bit.

Even in the twenty-first century, with my native language being regarded as the ‘closest thing’ to a universal language that our world has, I’d opt for Esperanto to replace it. English is hard, and even the natives purposefully mutilate it to suit their region-specific needs. (That’s not to say that there isn’t often heated debate about Esperanto grammar, because there is. These arguments, however, are usually faulty and correct on both sides because of the leniency of the grammar of the language.)

2) As previously mentioned, it helps you learn languages faster! There is a frequently-referred-to example of two classes: a class that learnt French for two years, while another class learnt Esperanto the first year and French the second year. Google that much right there and you’ll find all of the information that the internet has to provide regarding the study.

I’ve told my SO several times that it’s entirely likely that our would-be child’s second language (because s/he will be at least bilingual) might be Esperanto. I’ve selected this as the mostly likely candidate not because of how much I love the language, but because of how useful it is when applying what you’ve learnt from it to learning another language.

You find patterns quicker, you are exposed to more than just relative languages of your native tongue thanks to the fact the Esperanto can be traced to several different language families, and I honestly kind of wish that I had learnt Esperanto before Spanish, or French, or German, or Swedish. I have a feeling that it would have made my life a lot easier.

3) It’s (comparatively) easy to learn. It takes only about one-hundred-fifty hours to learn Esperanto entirely.

I know. It’s ridiculous. It’s also a nice change of pace, considering that nine months to two years is more often than not quite daunting in terms of non-physical commitment.

4) Also, because it’s easy to learn, it means that it’s a quick language under your belt. I’d be lying if I told you that I didn’t love saying, “I speak this language, this language, this language, &c….”, and I want to be able to speak a total of twelve languages by the time I’m thirty-one. The fact that Esperanto is a language that one can quickly and easily ‘tuck under one’s belt’ deserves recognition, even if most people won’t admit it in fear of sounding vain.

5) The so-called cons of knowing the language aren’t that bad. Many people, particularly those that argue against learning Esperanto, like to make mention that Esperantists greatly overestimate the probability of being able to find other Esperantists. While they certainly do have a point that there are relatively very few speakers of Esperanto around, I think that they don’t understand that most komencantoj know and are okay with that.

Do I genuinely think that I will be able to go to a town in the Midwestern United States and strike up a conversation with a stranger that just so happens to also speak Esperanto? Fuck no. I can’t even talk to customers at my day job in my Missourian hometown without them asking me where I’m from because I ‘say words so clear’. (Enunciate; they mean that I enunciate well.)

However, I knew from the get-go how few Esperantists there are in the world, and how unlikely it is that I may meet them. Others, I’m sure, have accepted that too; that’s why there are Esperanto conventions and meetings held all around the world, and why there are online chatrooms and websites and even an upcoming television channel dedicated to reaching out to us few. I’m more worried about starting my Frisian courses in October because it’s an endangered language; what happens if I spend all that time and effort learning it, only to never be able to speak with someone?

We know that we’re a living minority. We’re okay with it.

6) The Esperanto culture is so welcoming! Believe it or not I actually haven’t met another Esperantist in person, but I do know from meeting them on the internet that we collectively are usually extremely thrilled when we find someone else to speak to in Esperanto.

It doesn’t matter where you’re from, what your native language is, what religion you’re a part of, or why you came to Esperanto in the first place. Figuratively speaking, Esperantists are a huggy bunch of people, and I think that that strongly reflects on what a lot of learners of the language stand for—togetherness over all cultures. It certainly would have pleased Zamenhof, I’m sure.

We are an extremely proud and loving non-nation of humans from all corners of the globe, just waiting to let you in.

7) It’s underestimated, and I root for the underdogs. Reflecting a bit on Nos. 5 and 6, I think that it’s safe to say that if there is one vice that most polyglots are scared of admitting, it’s this: typically, we absolutely love being able to talk around people. Be it to sound intelligent, or be sneaky, or just to make others feel uncomfortable which in turns exerts a certain feeling of control, polyglots usually really enjoy having a secret language.

Because Esperanto is so small, so underexposed to most of the world, and because it has such a hybrid sound (see No. 8), it sometimes feels like the most secret language of all. I know for a near fact that I will never come across a native Esperanto speaker like I would a native Polish or even Welsh speaker. (Not until/if I meet my own child, that is…?)

8) It sounds like all European languages put together, after visiting Asia as an exchange student and inadvertently adopting the speech patterns there. Seriously, though. Esperanto sounds like the bastard child of a Romance-language mother and an estranged Germanic-language father. How Afrikaans is like a babied version of Dutch, Esperanto is to Slavic languages, and let’s be honest, we all get our languages confused from time to time… Esperanto sounds confused, constantly, but with confidence.

This Esperantist even thinks that China would be the best place to begin implementing the teaching of Esperanto in schools.

9) There is something liberating about speaking Esperanto. Why yes, I do speak a manufactured language with no physical nation and nearly no native speakers. It does make me a better linguist in the long run, no matter how many people tell me how useless it is. It is necessary that I post advert after advert on Craigslist and Duolingo, hoping that somebody will reply to me and that I’ll have a fellow Esperantist to speak to, and it is annoying that of all of the thousands of people on InterPals.net, somehow nobody speaks Esperanto…

… But guess what? The language does have a flag, and I will let it wave behind me proudly.

10) Perhaps the silliest reason, but a character from one of my favourite cartoon series as a kid spoke Esperanto. This is actually the first exposure that I recall having to Esperanto, when I was a tot, sitting in the living room, watching Danny Phantom. There was a super cool new ghost character introduced, named Wulf, and he spoke some ‘extinct nerd language’ (as Tucker explained it) called Esperanto.

At the time I didn’t know what Esperanto was, but I knew that I liked the werewolf character that spoke it, and it stuck with me ever since.

Yup, I was turned on to a language by a cartoon ghost of a werewolf of Nickelodeon, and kept it on the back burner for about a decade, but hey, I’m sure that there are stranger beginnings to longer stories.

Anyway, this is the compiled list of my personal reasons for learning Esperanto. Informative, perhaps not so much, but it was certainly entertaining to write, so I hope that you enjoyed reading it. I appreciate your time spent here, so here is a picture of some encouraging Esperanto stuff as a thank you: 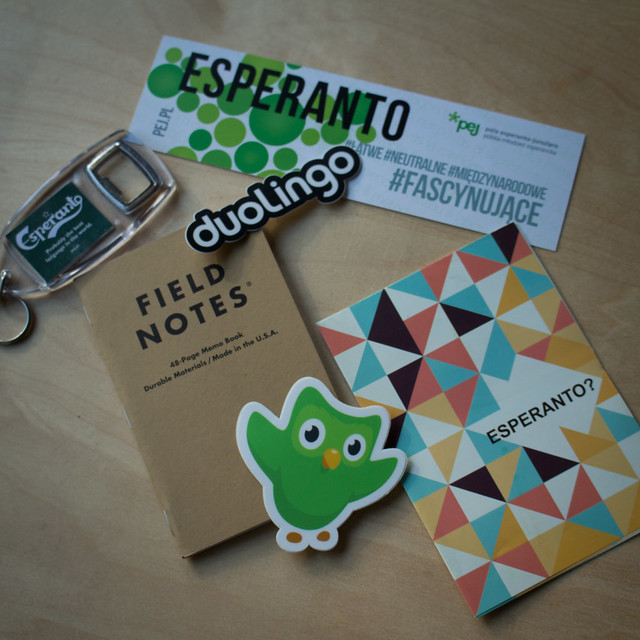 Are you learning Esperanto? Why or why not?

5 thoughts on “Why I Decided to Learn Esperanto”

This is a text widget. The Text Widget allows you to add text or HTML to your sidebar. You can use a text widget to display text, links, images, HTML, or a combination of these. Edit them in the Widget section of the Customizer.
%d bloggers like this: